This is the first in a series of monthly blogs that we hope will help you gain more confidence when selling Smithco products. This first blog concentrates on the benefits of greens rolling and is based on research undertaken by Rob Golembiewski, a green solutions specialist at Bayer CropScience. Some of this content was first published in Golf Course Industry magazine.

Golfers see a superintendent rolling greens and immediately assume increased speed is the end goal. Experienced superintendents know there are many other advantages, other than green speed.

As for the relationship between rolling and greens speed, there are a number of agronomic practices – height of cut, mowing frequency, fertility, soil moisture, growth regulator usage and verticutting – that influence how big a difference rolling will have on the speed of greens. 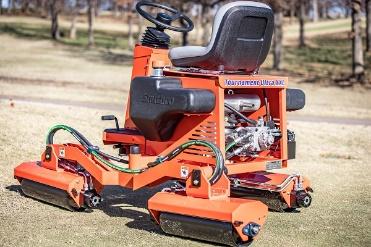 If a superintendent alternates between mowing one day and rolling the next, the green speeds would essentially remain the same as just mowing daily, says Golembiewski. However, the end result would be a healthier putting green since mowing, which can be very stressful on a turfgrass plant, is reduced to an every-other-day practice.

Golembiewski cautions additional weight can do more harm than good. “There is an old thought that the use of heavier rollers will result in greater green speeds,” he says. “Research has clearly shown that lightweight rollers are just as effective as heavier rollers. It is not about the compaction of the surface, but rather the smoothness of the surface.”

“The challenge I see is there are many superintendents who implement rolling programs without an intended goal in mind,” Golembiewski says. “In other words, they might roll when they have some extra time or they roll Monday, Wednesday and Friday because that is what another course is doing. Superintendents should give the same consideration to rolling programs as they do any other agronomic programs.” 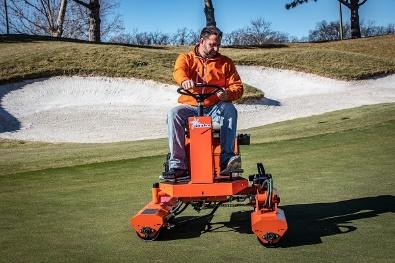 Based on university research trials, to optimize plant health and green speed, in part, comes down to deciding what you are trying to accomplish on your course, Golembiewski says. “If the intent is to maintain existing green speeds where only mowing has been implemented in the past, my recommendation would be to alternate mowing and rolling,” he says. “If the intent is to maximize green speeds while limiting plant stress, my recommendation would be to roll daily and mow four times a week. With this program, the superintendent always has the option to add in additional mowings or lower the height of the cut slightly to increase green speeds for tournaments, club championships, etc.”

“The greatest risk that exists from rolling greens is the potential for wear on the collars where the roller stops and starts,” says Golembiewski. “This is especially the case when there is very little room on the edge of the green due to bunker placement or steep slopes. Some golf course superintendents have started using mats in these situations to reduce the potential for wear injury.”

This website uses cookies to improve your experience while you navigate through the website. Out of these, the cookies that are categorized as necessary are stored on your browser as they are essential for the working of basic functionalities of the website. We also use third-party cookies that help us analyze and understand how you use this website. These cookies will be stored in your browser only with your consent. You also have the option to opt-out of these cookies. But opting out of some of these cookies may affect your browsing experience.
Necessary Always Enabled
Necessary cookies are absolutely essential for the website to function properly. These cookies ensure basic functionalities and security features of the website, anonymously.
Functional
Functional cookies help to perform certain functionalities like sharing the content of the website on social media platforms, collect feedbacks, and other third-party features.
Performance
Performance cookies are used to understand and analyze the key performance indexes of the website which helps in delivering a better user experience for the visitors.
Analytics
Analytical cookies are used to understand how visitors interact with the website. These cookies help provide information on metrics the number of visitors, bounce rate, traffic source, etc.
Advertisement
Advertisement cookies are used to provide visitors with relevant ads and marketing campaigns. These cookies track visitors across websites and collect information to provide customized ads.
Others
Other uncategorized cookies are those that are being analyzed and have not been classified into a category as yet.
SAVE & ACCEPT
Scroll To Top